skip to main | skip to sidebar

Sad news on Jackie Hayes, owner and frame builder of
Comet Cycles frames since the early 1960's and son
of Comet Cycles founder Slater Hayes.
Unfortunately Jackie is now in a retirement home
after his condition of a dementia became to
much for his wife to manage. 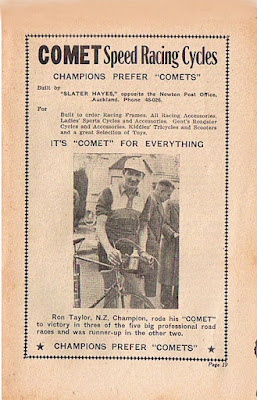 I was in Auckland a week after hearing this bad news,
so took the opportunity to track down a very original and
extremely pretty mid 1950's Comet road/track
bike, that I had tried to buy several years ago.
However the owner had wanted quite a bit to much
money for it at the time.
Unfortunately the owner had in the intervening years
moved house, and left the frame on a damp floor
underneath their new house, the rust, which had only
just started biting into the chrome when I had last
seen the frame, had now completely destroyed
the chrome, a real shame. 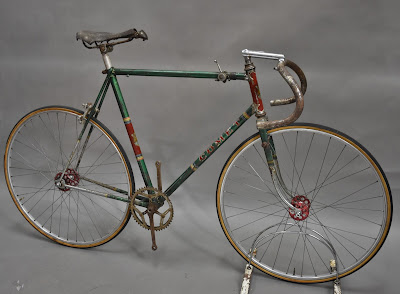 I really shouldn't have really brought the frame in the condition
it was now in, as I do already have a couple of Comets, but
what can I say, I was feeling pretty sad about Jackie,
so I decided that I would buy this one (for still way to much!)
and fully restore it back to it's full glory as my homage to
my friend Jackie Hayes and Comet Cycles.
Jackie was a great guy, and I always enjoyed visiting him,
hitting the record button on my Sony TD-D5
and listening to his memories of the cycle trade,
frame building and cycle racing. 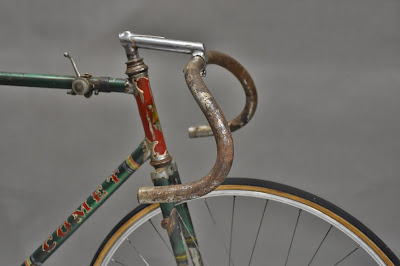 The real bummer about this bike, is that the beautiful original
paint,handpainted writing and box lining was in pretty
good nick, but the rust is just to far gone on the
front forks and rear stay's. 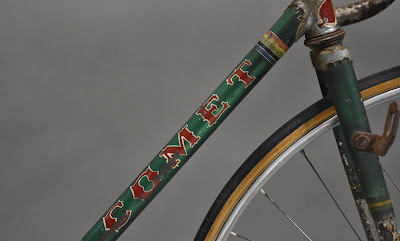 Comet writing is sprayed on using an alloy stencil, then hand lined 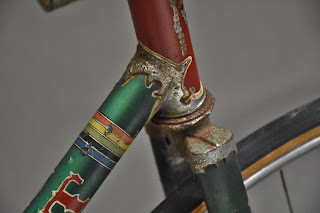 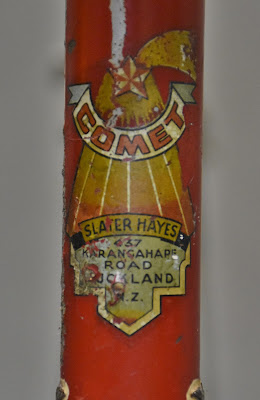 This is the early Karangahape Rd shop decal,
with the subtle fades, and nice light blue,
compere this to the later Great North Rd
decal here. 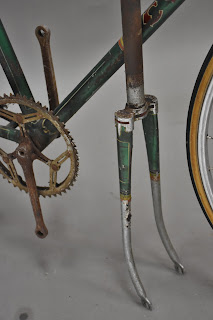 Another thing that I really liked about this frame is that
it was custom built as an actual dual purpose bike.
It has track rear drop outs, and also cable guides for rear brakes,
and two sets of forks, road with light boss, for night training
rides, and track forks for the weekend track meets.
This wasn't uncommon in New Zealand, cycle racing wasn't
really a rich man's sports in the 1950's, most riders where
young, and had to make what money they did have, stretch.
Many competitive riders could only afford the one racing
frame, so rather than go for the compromise, like  the
Carlton path bikes, some would have a custom built frame
with two sets of forks made like this. 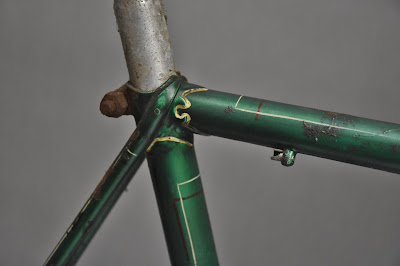 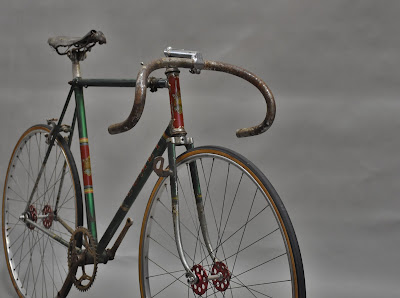 Looks good with the Red Airlites, it didn't come with these,
but I will have to use them in the final build, they suit the
frame just right I think.

Posted by the flying wheel at 9:12 PM

the flying wheel
We like bikes, free jazz and some other stuff.